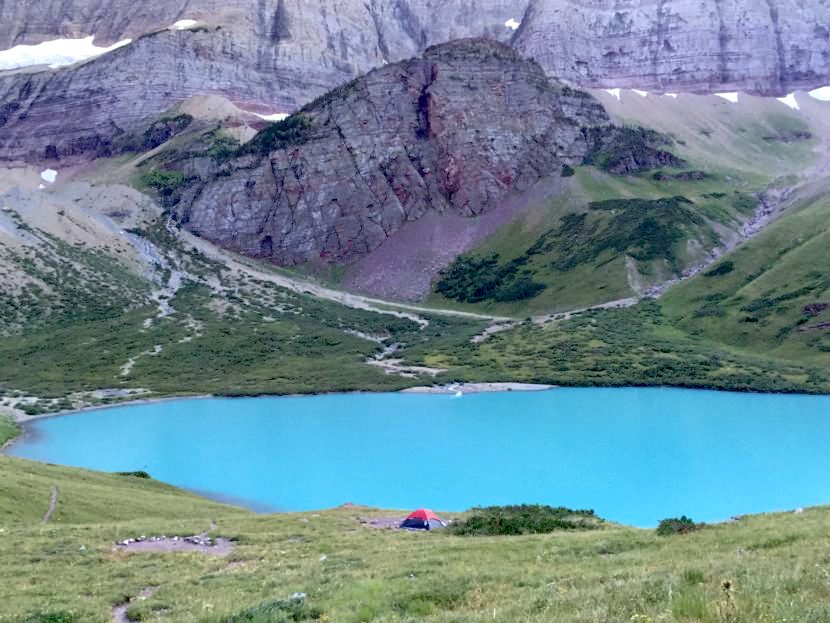 The wind is howling as it whips down the towering peaks above us, shaking our tent like a toy. All three of us make feeble attempts to weigh down the corners of the tent so we didn’t become airborne, which at this moment feels like a real possibility. My arm whips back and forth as I try to hold my corner of the tent down, the fabric whipping against my neck as I lie there on my back, wondering if this might be why no one else is camping around Cracker Lake tonight. The rain is driving sideways into the tent’s thin coat of polyester and nylon that somehow keeps us dry… for now.

Clearly, my two college buddies and I had no idea what we were in for that night as we trekked through the backcountry of Glacier National Park in Montana. Mike #1, (Abt) Mike #2 (Wylie) and I hiked for hours to reach this secluded spot, the bear bells tied to our packs jingling almost in unison as we pushed forward on the trail. Bear bells are a must in Glacier, with the highest population of Grizzlies of any park in the contiguous 48 states.

We crest a mean hill and are rewarded by the show-stopping view of a piercing blue lake, so blue it seems like the sky is inverted and is now on the ground. Yet this lake seems even bluer than the sky… almost electric blue. As the trail nears an end, we see that we now have all of Cracker Lake to ourselves. At least so we thought.

As we begin to set up our tent, we hear what is now a familiar peeping of marmots. They seem so innocent. But let me tell you, it’s all for show. One minute, I catch myself thinking, you know, I wonder what it would be like to have a pet marmot? The next minute, I’m cursing the existence of these little rodents. Let me explain.

Within about thirty minutes of when we first put our packs down, the marmots apparently all had a meeting and decide to descend upon our snack stash. Durable weatherproof backpack material? No match for the marmot convention. They rip into our bags and have an absolute feast. Well-played, marmots. Procrastination must only be a human thing.

As the memory of our favorite snacks fades away, we begin to relax. Fortunately the wildly windy storm we would soon endure was short lived, and the clouds give way to clear, starlit skies. We soon begin to drift off. But soon I’m awakened by something making enough noise to be larger than I imagine even the King of the marmots would be. I bury myself in my sleeping bag cocoon, half-believing my thought that it must just be a mountain goat.

We awaken to an eerily still morning. There’s no breeze at all. Cracker Lake is so still that it perfectly reflects the mountaintops that peer down on this could-be National Geographic setting. I walk down to the water and whip a rock into the electric blue, making ripples that slowly extend across to the opposite shore.

Soon the morning silence is broken by the sound of ravenous, ruthless marmots, probably having a morning meeting to plot their next attack. Fortunately, we successfully strung our packs up and away from the reach of these cold-hearted beasts, and were able to put together enough of a breakfast to include some wretched but welcomed instant coffee.

As it turns out, we wouldn’t need the coffee at all. I’ll come back to that. But first, a moose.

Though Wylie’s only wish for the trip (to see a moose) was fulfilled yesterday, the moose would make another appearance, this time opting to go for a morning swim. We watched Wylie’s moose leap off cliff and into the water, which was almost as memorable as being charged by a moose (that’s another story).

The largest creature I’ve ever encountered in the wild paddles toward us, only his head and ears protruding above the surface of the otherwise glassy-smooth lake. About halfway across the lake, Wylie’s moose makes a right turn, as he probably could smell that we hadn’t showered in a couple days. We watch the moose climb up on shore beneath Siyeh Glacier… really just another one of those, “Pinch me – where am I?” moments.

Wylie’s moose emerges onto the shore and disappears into the thick green underbrush that hugs the shore. Naturally, we agree that we should walk around the lake in the direction of the moose.

We make it down to the mouth of the lake, fed by a long meandering stream of water cascading down from the melting glacier. Looking out at the expanse of this magnificently blue lake at water level, cushioned by beautiful green slopes and lightly snow-capped peaks… this is a scene I will always remember:

One of us has the idea that we should jump off the cliff into the lake before we leave. Soon we are all standing on the rocks next to the water, preparing to go swimming. In a lake fed by a glacier. I should clarify here that despite what you may be thinking, none of had been drinking.

As my mind races, it takes Wylie reminding me that he’s filming to bring me back. I launch forward and plunge into the pristine blue water, the frigid cold immediately grabbing me as I sink down, much farther than I wanted to sink.

I shoot up and let out a shriek probably a few octaves higher than I’d like to admit, and scramble for shore. Just imagine plunging into the coldest water you’ve ever felt, add a bucket of ice water to it, and maybe, just MAYBE, it’s as cold as Siyeh Glacier runoff-fed Cracker Lake.

As our hearts beat with adrenaline and joy of being in this unforgettably beautiful place, we towel off and make our way back to our campsite. It’s finally time we must be on our way.

Whenever I have a challenging moment, or have been sitting for too many hours indoors, I find a rejuvenating spark when I can recall what it felt like to stare out at glacier-backed bright blue Cracker Lake, and I am reminded of how much this kind experience feeds my soul.