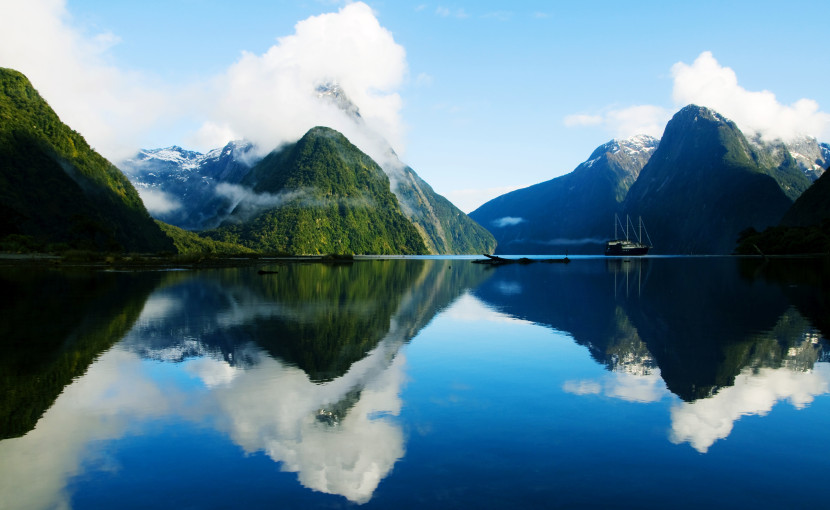 One of the Most Otherworldly Places on the Planet – New Zealand

If there’s ever a place that that will fill your spirit with awe, let alone your camera’s memory card, it’s this epically diverse wonderland in the South Pacific.

One day you can enjoy natural hot springs, and witness geysers and bubbling, hissing geothermal activity, and then on the next find yourself at the foot of a glacier staring up at a bevy of snow-capped mountain peaks, many of which tower above 10,000 feet.

New Zealand has it all, except maybe smog and congested five-lane freeways. For those that love the outdoors, the land of the native Maori and the proud Kiwi is home to several of the most heralded treks (a multi-day hike) in the world. The Grand Traverse and the Milford Track, both on the South Island, will send you over mountain passes and through national parks that invigorate the body and soothe the soul.

But don’t feel you have to strap on your hiking boots and schlep through backcountry in order to marvel at this comparatively tiny country’s natural beauty. The majority of the island’s national parks are accessible via car, such as Fjordland National Park on the south island’s southwestern coast. (Fjord: a long, narrow, deep inlet of the sea).

Milford Sound is the most well known fjord, but Doubtful Sound, also the country’s deepest fjord at almost 1,400 feet, has the reputation for being even more beautiful, perhaps in part because of the minimal boat traffic and non-existent aerial tours, giving its visitors a serene quiet to compliment the views.

On your way to the coast, don’t forget to stop in Queenstown, the so-called “Adventure Capital of the World” and birthplace of both bungee jumping and jet boating. If you like the outdoors and you happen to be an adrenaline junkie, you may never leave this magical country.

If you take the plunge and book the lengthy yet rewarding flight from the States, here is some of what you can expect, straight from my memory bank. (I haven’t yet been to the North Island so what you’re about to read is a brief capture of the more verdant South Island):

Wonderfully windy, “how the heck did they build these??” scenic roads carving through lush green scenery.

Kind-hearted, lively host citizens (also known as ‘Kiwis’) that love their country, their meat pies (don’t knock it before you’ve tried it) and their rugby.

Turquoise blue lakes with often-barren rocky shores that make you realize you have to get out of your car once again to explore, derailing your attempts to make it to your destination on schedule. Wait…what schedule?